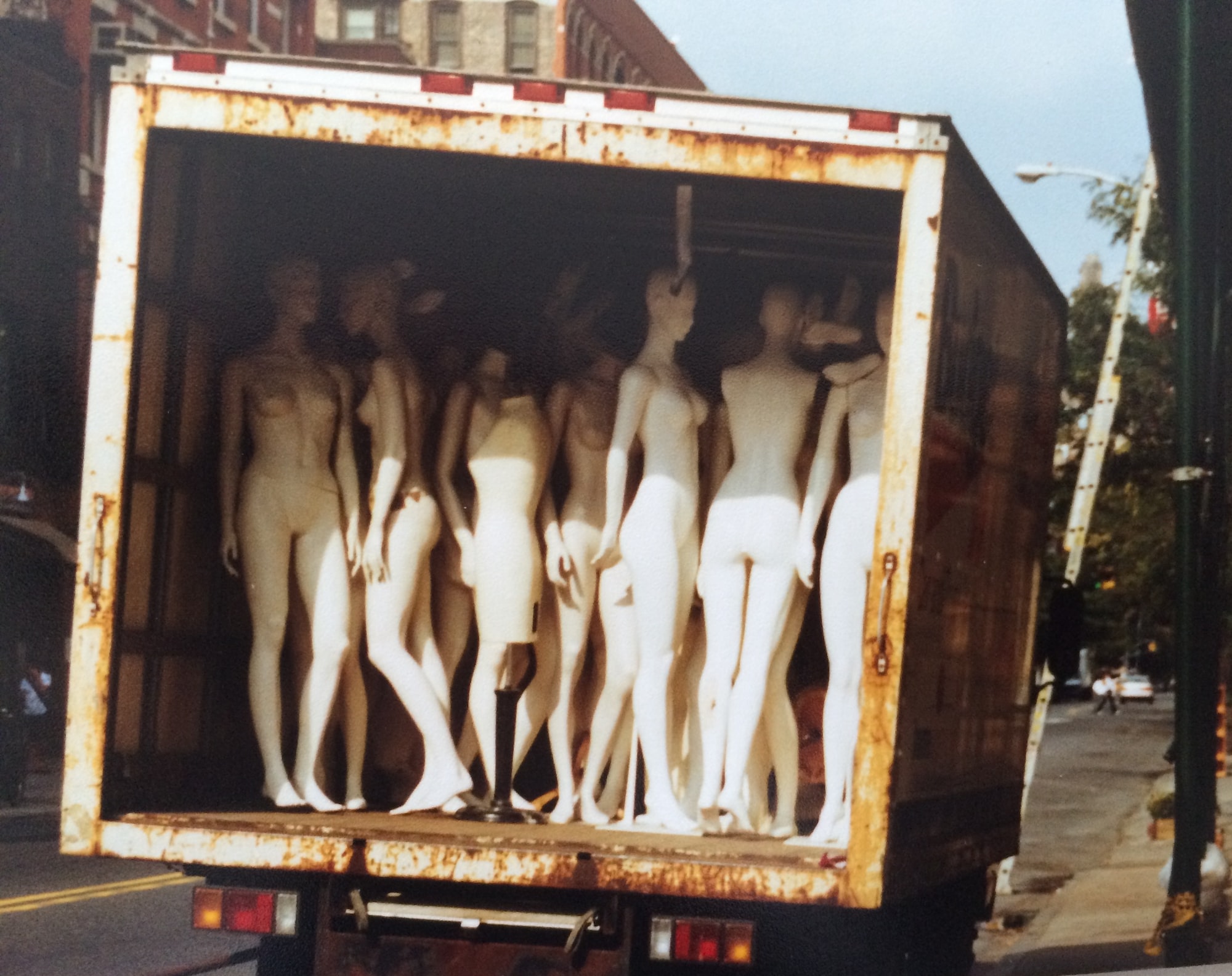 When I was in fifth grade, I learned that I was fat. I was sitting on the floor of my brother’s room; we were playing cards—I don’t remember which game—and I, for some reason, was shirtless. He pointed to the rolls of fat around my chest and belly, laughed, and called me fat or a fatty or something like that. I don’t really remember his exact words.

I do remember the feeling, though.

I also remember that, in my typical fashion, I tried to play it off as a joke to show him that I didn’t care. But it hurt me.

I don’t know if that’s the moment when I began to feel a sense of shame about my body. It probably isn’t. That feeling probably started earlier on. But that was definitely the moment that I became acutely aware of the fact that I wasn’t shaped like the other kids at my well-to-do, suburban public school.

For nearly three decades now, I’ve struggled with my weight and the way that my body isn’t angular at all, nor is it muscular like the men I see all over the media. I’ve gone on a number of diets—the first one when I was a senior in high school—and workout programs. I’ve used journals and applications to track what I’m eating and the workouts I’m doing (or not doing). I’ve spent dozens of hours reading books, magazines, and websites devoted to fitness and nutrition. I’ve latched on to fads and crazes, found success, boomeranged, and done it all over again.

Now in my late thirties, I’m happier (and healthier) than I’ve ever been, and it’s because I chose to disobey what the world was telling me about my appearance. I chose to ditch the rules that said that I had to do certain things in order to look a certain way. As a result:

Each of those bullet points could be a book, but I want to start with that final one: not worrying about your weight. Most of us live with a couple of numbers in our head: our current weight and our goal weight. If you can find a way to get those numbers out of your head, then you stand a chance of finding some peace around this whole issue.

Step One: Pull out your bathroom scale and put it in the trash because that's where it belongs.

I used to weigh myself every week. That weekly weigh-in became every day. I have mountains of data, in notebooks and in the iPhone Health app, about the fluctuations in my weight.

But when I ditched the scale, I also ditched my worry and anxiety about my weight and my appearance. Mostly. It’s a work in progress. The key, however, has been working less on balancing the scale and more on balancing my mind.

Life is NOT about trying to drag a certain number down. Life is about picking yourself up and being present.

So much of what we do in life is determined by our mindset. Our point-of-view and our expectations govern our judgment of the events and people we encounter. By adjusting our mindset, we can find happiness even in circumstances that don’t seem like they should be happy.

Here’s the thing, I’ve got a total “dad-bod.” I’m a little round in the middle.

For years—decades!—I thought that was wrong or gross. I saw myself as weak and incapable. I looked in the mirror and saw someone who was undisciplined, who was less-than, who was unhealthy. I felt like I was diseased.

What do you really expect to look like? Do you roll out of bed, look in the mirror and immediately judge yourself because you don’t look like Hugh Jackman or Zoe Saldana? Do you look at your shirtless self and think about all of the time you’ve wasted in not-looking-like The Rock?

Here's a fact for you:
The media has utterly destroyed any sense of realism about what human bodies actually look like.

Google it! Actually, don’t. You know that I’m right. Don’t waste your time.

It’s pretty bizarre, really. We walk around this world every day and we come into contact with normal people who mostly aren’t The Rock, yet we feel, somehow, that that’s how we should look. We get it in our heads that the “humans” on the covers of the magazines that we stare at while queued up at the grocery store are the norm, in spite of the evidence right in front of us: all of the people standing in the grocery store queue around us!

If you wake up in the morning and expect to look like a movie star or a supermodel, you’re going to wake up every morning and feel disappointed. (Even if you are one of those things, it’s unlikely that you roll out of bed looking like you do on the screen or on the cover of the magazine.)

The world is going to tell you that that’s what you should look like. But the system that we live in, the one governed largely by media and advertising, is really just preying on your insecurities and trying to sell you something you absolutely do not need.

You’re unruly. You will not submit to a system that devalues you and uses you like that. You cannot be mastered or tamed into thinking that you should look like that size-0 on the cover of Us Weekly.

When you wake up and look in the mirror, expect to look like yourself. Every morning. That’s who you are and it’s a miracle that you’re there in the mirror. Take it from Lizzo.

Now, if you wake up in the morning and experience the sense of displacement and existential angst of Gregor Samsa , you look down and don’t recognize yourself because you’ve turned into a cockroach: changing your expectations isn’t going to help you. You need something else.

Stop expecting to look like someone else.
Adjust your expectations to you.

I’m a dude with a dad-bod. Guess what? Dad-bods are totally in. They always have been and they always will be and if you disagree with me you’re wrong and I don’t care.

Once you’ve become acquainted with appropriate expectations—I expect to look like me—then it’s time to take into consideration what you actually control:

So many of the factors that influence my weight are not in my control. Let’s look at two in particular:

I can’t control my DNA. I was dealt this hand at conception. I can either fight my genetic pre-dispositions, or I can roll with them.

I’m an endomorph. My DNA predisposes me to have a little extra thickness around that middle section. I can battle it, of course. I can starve myself, I can workout to exhaustion everyday, but what a waste! Why fight something that is natural.

Instead of waging war against my genes, I'm learning to embrace them. Here’s the deal: my body is advanced! I’m super-good at storing energy for later. I’m hyper-efficient in that way! When the zombie apocalypse arrives, my body will be able to store up fat energy for me to use when food becomes scarce. I’m an evolutionary marvel!

I can’t control the genes I was given at birth. I don’t want to control them. I don’t need to. It’s fruitless, a waste of time to try to control anything that is beyond your control.

Roll with your genes.

I’ve done a thousand things that were bad for my health: smoking, drinking, overeating, a lifestyle that was, at times, too sedentary. I’ve done it all!

I can’t change that.

The past is the past. We do not have the ability to reach back and change it. We can beat ourselves up over it, we can wish it were different, we can mope and pout. But we cannot change it.

Enjoy this moment. It’s the only time you’ll ever experience it. You’ll never be able to come back to it. Never.

One slice of cake is not the difference between healthy and unhealthy. Health—physical, mental, emotional—is a matter of balance, of finding a path that cuts right in between the false dichotomy of either/or that confronts us every day. The world tells us that things are healthy or unhealthy, but the world does not take into account context.

Is eating a slice of chocolate cake the most nutritious option for me right now? Probably not. But put the cake into context; nothing comes without context. My son baked it. He’s proud of it. I love this kid and he loves me. He baked this cake and wants me to enjoy it. I love that he’s proud of his creation. I want him to see someone benefit from what he’s done. I want to encourage him to create things for other people. A good, productive life is one in which we create. He has created. We need to celebrate that.

Would it make any kind of sense for me to say to him: “Sorry, kid, that cake is not a nutritious option for me. I’m trying to look like a Hemsworth in the next few weeks”?

No. In fact, that path would probably be detrimental to my health because of the way it would negatively impact our relationship. This kid has baked something for me; he’s trying to connect here. I want that connection. Moreover, I want him to understand that the act of creation—in this case, baking—is a valuable and worthy pursuit.

Eat the damn slice of cake!

I do. It’s good. He could work on his icing game, but I’ll spare him that criticism and give him the hug that he deserves.

Practicing your unruliness, living in disobedience here means that you’ve got to separate yourself from the bogus system that tells you what you should look like and how you should behave. Health is not an either/or proposition. Health is not what you see in those doctored images on television and in magazines.

Wrap your mind around the miracle of today and of this moment. Look out beyond yourself and understand that the universe has conspired, since the Big Bang some 14 billion years ago, to bring this moment into existence. Will focusing on the negative self-talk and the number you see on the scale this morning help you to enjoy the sun dancing through the spring leaves on the oak out in your yard? No.

Don’t measure your weight, but measure your presence. Are you here? Are you now? Or are you somewhere else, focused on the past or on the future?